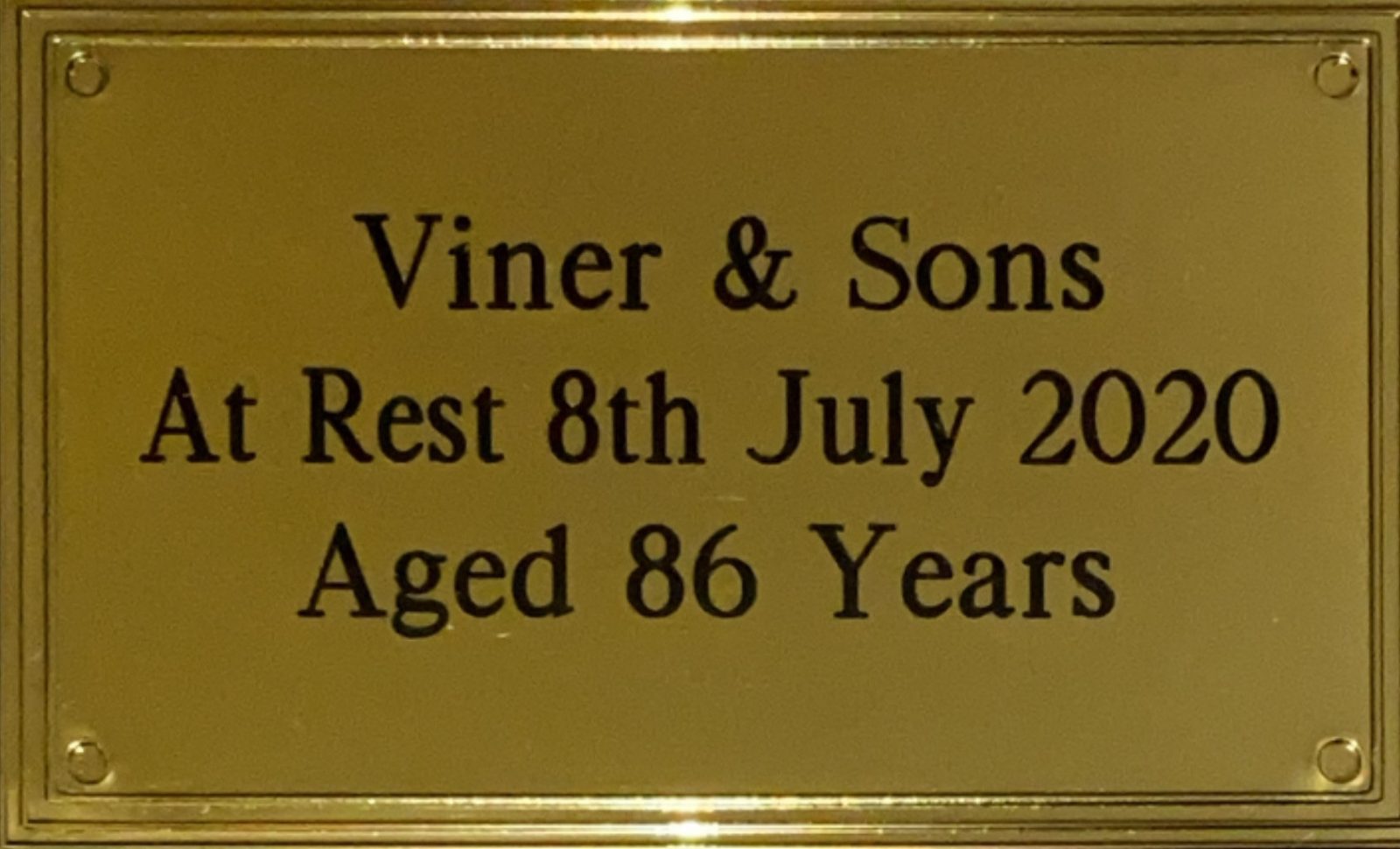 We are pleased to be able to offer a large variation of coffin and ashes plate designs ‘in house’, at Viners funeral home in West Malling.

Using a state of the art Gravograph engraving machine combined with associated and comprehensive software, we are able to cut a large variation of standard coffin, casket and ashes plates, including temporary grave marker plates.

The plates we predominantly use have a brass finish and are engraved in black lettering, but a silver and ‘wood effect’ finish are also available.

The design can comprise of simple lettering and inscriptions of your choice in a variety of fonts, including the name and ‘date at rest’ or other terms of endearment. They can also combine a multitude of motifs and emblems alongside.

The motifs can range from the commonly used borders, corners, crosses (both Catholic & Church of England), to flowers and doves.

There are many other motifs and emblems that can be added for the more personal touch should your loved one have had a particular hobby, interest or occupation that they were passionate about, including various sports.

Other religious symbols are also available to cater for the many religions, including the Hindu Om and the Jewish Star of David.

There are such a large and varied number of symbols available, that we have even designed exit, access, information and hazard plates for use at our own funeral home in West Malling!

For your interest, coffin plates date back to the 17th century and were generally reserved for use by wealthy people. The higher the status of the person, the more expensive the metal and elaborate the design was.

By the mid-19th century and the rise of the industrial revolution, the cost of the plates decreased and so most people could afford to have them on their loved ones coffin.

Please do enquire when making the funeral arrangement should you require a particular design engraved onto the coffin plate.

Are We Saying Goodbye To Traditional Funerals?

When you think about what a traditional funeral is, you may think about mourners who arrive dressed in black, traditional caskets and formal, religious services, but are they still important parts of how we arrange funerals in the UK? We took a look at some of the most commonly requested funeral trends to find out.

What Happens At a Funeral Directors Appointment?

When it comes to arranging a funeral, you will need to contact a funeral director and arrange an initial meeting. You can usually expect to get an appointment quite quickly, as funeral directors understand the need to provide you with the best level of support during this difficult time.

It’s never easy sorting through a loved one’s effects after they’ve passed away. In this digital age, many people also have to decide what to do with someone’s social media accounts after a bereavement. Unless your loved one has left specific instructions about their accounts, you’ve got some decisions to make.